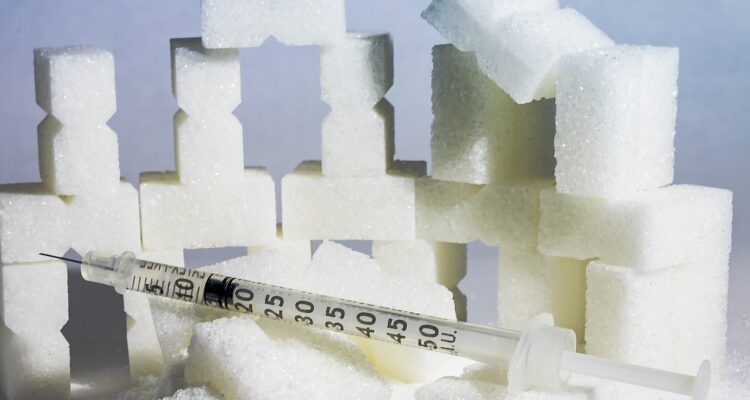 Insulin is a hormone that regulates how the body uses energy primarily by controlling the use of glucose by the cells.  The energy source is the carbohydrates, proteins and fats that nourish the body. Calories measure the amount of energy that is contained in foods and drinks consumed. After the consumption, the digestive tract breaks down the fuel into amino acids, glucose and fatty acids which cross into the bloodstream.  In response, insulin released by the pancreatic beta cells directs the cells of the muscle, liver and fat to take in the energy to be used for immediate energy, making proteins to support cell function, and storing the excess calories away to meet future energy demand.

When there is ample fuel in the system after eating a large meal then high levels of insulin cause the liver and muscle cells to make glycogen and the adipose (fat) cells to make fat.   In between feedings when the recently ingested calories are used up, the insulin level drops and the cells of the liver start breaking down the glycogen stores into glucose and releasing it back into the blood for the rest of the body to use for energy, especially the brain where glucose is vital for proper function.  This keeps the blood glucose level from dropping to low causing a system malfunction (“sugar crash”).  In addition to the liver’s action to low insulin, the muscle uses its own glycogen stores for energy and the adipose cells break down their fat stores and release fatty acids into the blood to be used as an alternative source of energy for the rest of the body (“fat burning”).

Type 1 Diabetes occurs typically in childhood when the immune system malfunctions and attacks the beta cells in the pancreas.  Over months to years, the beta cells are destroyed and the body can no longer produce insulin.  Without insulin the cells of the body are not able to effectively absorb glucose causing the blood glucose levels to rise while the cells are starved of glucose. Type 1 diabetics require exogenous insulin usually through self-administered injections or a pump to survive.  About 1% of the US population has type 1 diabetes.

Type 2 Diabetes occurs despite adequate to high levels of insulin when the body has become so insulin resistant that the beta cells cannot make enough insulin to properly control blood glucose and blood glucose rises above normal.  Left unchecked, the elevated glucose level causes inflammation and small blood vessel destruction which causes damage to the heart, eyes, kidneys and nerves.  About 10% of the US population has type 2 diabetes.

Prediabetes became a diagnosis at the behest of the American Diabetic Association in 2010.  The organization expressed concerns about the growing epidemic of type 2 diabetes.  It refers to a level of blood glucose that is lower than the diabetic range but above a set point they choose as normal.  Prediabetes is associated with an increased risk of diabetes at 2-3% per year, but it is controversial whether there is significant increased risk for the complications of diabetes and if aggressive management with medication is any more effective at preventing diabetes over diet and lifestyle changes alone.  Over 1 in 3 US adults has prediabetes.

The hippocampus which is considered the learning center of the brain has many insulin receptors. Studies have shown that insulin enhances attention, memory and cognitive processing.  Ever feel like you learn better or are more dialed in after snacking?

Hypoglycemia happens to everyone if they have gone several hours without eating especially if they have been highly active physically or mentally.  The symptoms are usually mild such as a headache, increased appetite,irritability and fatigue. A little snack especially if high in carbohydrates takes care of this quickly.

But some people are particularly sensitive to insulin, and after eating, the insulin release causes the blood sugar to plummet and drop the blood sugar level very low. Since the brain needs glucose for power, when the blood glucose level drops too low, the body feels weak, shaky and dizzy.  If it drops very low it can cause blurry vision, confusion, seizures and even loss of consciousness.  This is particularly common after extreme weight loss when the body has quickly become more sensitized to insulin.

The most common cause of reactive hypoglycemia is a poor diet.  If it is high in sugary foods, especially if there are “added sugars”, the glucose can cross into the bloodstream rapidly and provoke an excessive insulin response .  If the spike in insulin causes the liver, muscle and fat cells to take in glucose faster than countermeasures can stabilize the blood sugar then the blood glucose plummets and reactive hypoglycemia occurs.

Treating reactive hypoglycemia is relatively simple.  The ingestion of simple carbohydrates like a glass of juice or 2 tablespoons of honey should normalize blood sugar in 10-15 minutes.  However, to prevent hypoglycemia it requires long term changes in dietary habits and eating behaviors:

Sarah’s Weight Management Corner
Normally, insulin released after a meal acts with leptin to suppress appetite but for people with insulin resistance the appetite suppressant effect is diminished making it more likely that they will feel hungry sooner making it harder to lose weight. Get sensitive to beat the hunger monster!

John’s Healthy Lifestyle Corner
Nuts and whole grains are great sources of good fats, protein and fiber. And make great snacks and side dishes. Incorporate them into your diet to prevent hypoglycemia, stay off hunger and lower the risk of heart disease and dementia. You are what you eat – get NUTTY!